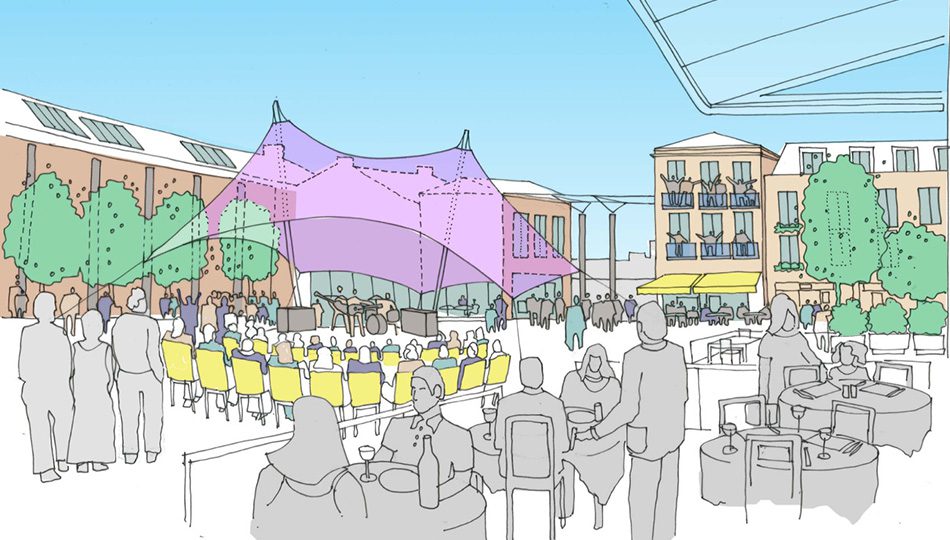 Our relationship with our localised community has recently become complex and multi-layered. Perhaps it was always thus but we just didn’t have cause to analyse it so closely. The shock of the pandemic and the impact it has had on all we take for granted has left many of us looking at our immediate context differently. Being forced to live with restrictions on movement has led us to re-examine the attractions of an environment in which everything we need for a fulfilling lifestyle is close at hand. Our willingness to adapt to a new situation is more than just merely seeking to make sense of the reasons why we must. Or to stoically make the best of a bad situation. It’s a recognition – however reluctantly acknowledged – that much of what we did pre-2020 wasn’t necessarily by design.

Tom Waits 1983 song, ‘In The Neighbourhood,’ paints a perceptive picture of this duality; of taking pride in the things that are dear to you in your circle of existence even though much of it annoys you. The ’15-Minute City’ or ‘The Neighbourhood City’ nomenclature will soon pass into cliché-territory due to over-use but the principles behind the philosophy are becoming far more attractive. The way we communicate, travel, consume and socialise has been moulded over this last year by prohibitive boundaries few would’ve chosen beforehand. Yet our resilience has forced us to rediscover locality, with many of us now advocating a better, and more balanced quality of life.

The concept behind this is predicated on improving lifestyle choices by creating mixed use urban quarters where everything needed can be reached within a quarter of an hour by foot or bike. The lifestyle mix that sustains this residential model contains localised community Education, Healthcare, Workplaces, Leisure and Cultural spaces and – importantly – a cohesive public realm that underpins it and provides the uniqueness of identity necessary for the community to be memorable. Each neighbourhood should fulfil six social functions: living, working, supplying, caring, learning, and enjoying.

A traditional village environment prospers on this basis. The promotion of a community model where everyone knows everyone else has a self-serving romanticism that can have different levels of attraction dependant on age or attitude. Independent retail, as an example, thrives in a context where the retailer can rely on the first-name terms patronage and loyalty of the locals. But this lack of anonymity can also be stifling and claustrophobic. As with most things in life, the balance needed comes from the freedom to choose and not differentiate.

Unsurprisingly, much of the latter-day ideas of urban city planning have come from the United States. With less of a need to respond to the overcrowded, dingy, and disease-ridden cities of post-Industrial Revolution Europe, the American planners and theorists were more immediately focused on the concept of developing planning formula where little had previously existed.

William E. Drummond – a central architect in Frank Lloyd Wright’s studio between 1899-1909 – defined the ‘Neighbourhood Unit’ within his submission to the Chicago City Club’s planning competition of 1912. The competition wanted to address, “the theoretical and practical parameters, social and physical, of a micro-community in a suburban context with a focus on housing.”

In the late 1920’s, Clarence Perry foresaw the rise of the automobile as a challenge to – and, simultaneously, an opportunity for – these developing urban parameters. Perry’s neighbourhood unit was conceived of as a comprehensive physical planning tool, to be utilised for designing self-contained residential districts which promoted a community centric lifestyle. The core principles were organised around several physical design ideals:

These design principles from a hundred years ago are now back at the forefront of community-focused urban planning. This isn’t hugely surprising. Even before a year of perpetual lockdown, the climate emergency was forcing us to address the implications of our escalating carbon footprint. COVID-19 has forced us to be more local, less regional, and far less global in our physical movements. Technology has allowed us to continue to work globally but without the direct need for travel. As the restrictions lift, a better work/life balance might be the future aspirational incentive for this, as opposed to the recent perception of it being forcibly applied. More time spent productively and with family, versus increasing time spent log-jammed on the country’s overstretched motorways? Less overhead costs for those organisations fortunate enough to have the choice. Consequently, new sole-use estates – or neighbourhoods – comprised of multitudes of small, pitched roof shoeboxes and very little else, aimed at the travel-orientated nuclear family might also gradually diminish under these circumstances.

Without prior definition as such, established ‘neighbourhoods’ already exist, displaying very specific identities. The community based in Hillhead around the fulcrum of Glasgow’s Byres Road is effectively a model of a 15-Minute City. The Hillhead area is densely residential but desirably human in scale. It attracts a University-style demographic that is culturally diverse and artistically rich. Equally, it is connected to the wider city by a network of attractive walking, cycling and underground transport routes. As a model for the type of principles originally established by Clarence Perry, Hillhead displays much of what the locally supportive, green ‘neighbourhood’ environment should demonstrate.

Environmentally responsible models of ‘live, work, and play’ communities are on the rise. Trailblazing developers are embracing the drive towards the types of adaptable mixed-use communities promoting different types of living supported by the technological benefits of a ‘work from anywhere’ philosophy, rather than our lives being boxed into chunks of traditionally pre-determined time. The way we receive information and communicate with each other are obvious examples of the rapid pace of change. The socially inclusive rules of our society have also become attitudes and values by which organisations are now measured.

A necessary increase in convenience purchasing via the internet will eventually influence the type of retail establishments that are required. They might get smaller becoming more general, more independent and more community orientated. Our patterns of relaxation are also certain to change with leisure pursuits becoming more locally focused as our new communities attempt to become more self-sufficient. Localised energy budgeting, generation, consumption, and measurement suggests less nationalisation of employment. Extending this argument to wider community services begins to point to models of Scandinavian living in the form of examples such as Hammarsby in Sweden. It would be difficult to argue that the standard of living and the resultant reduced levels of crime experienced by that community do not have some universal attraction.

Architects are trained to think that everything can be solved by good design, and to a certain extent, a designer’s eye for urban planning cohesion, consistency, control and connected spaces has contributed to the greatest of our cities. But urban design is often responsive, rather than prescient. As well as unforeseen phenomena, design perpetually redrafts responses to processes it can’t control. Given this, a drive towards the smaller, more human scale of the connected ’15-Minute City’ philosophy is one which Keppie welcomes. Where our predecessors developed communities that were either self-contained in their Victorian era or dispersed in response to the perceived freedom of the car, we are of the generation that wants it all: the benefits of a vibrant, connected, urban environment full of meaningful and characterful space but without losing the accessibility that allows it to flourish.

Stobhill: A Focus on Mental Health