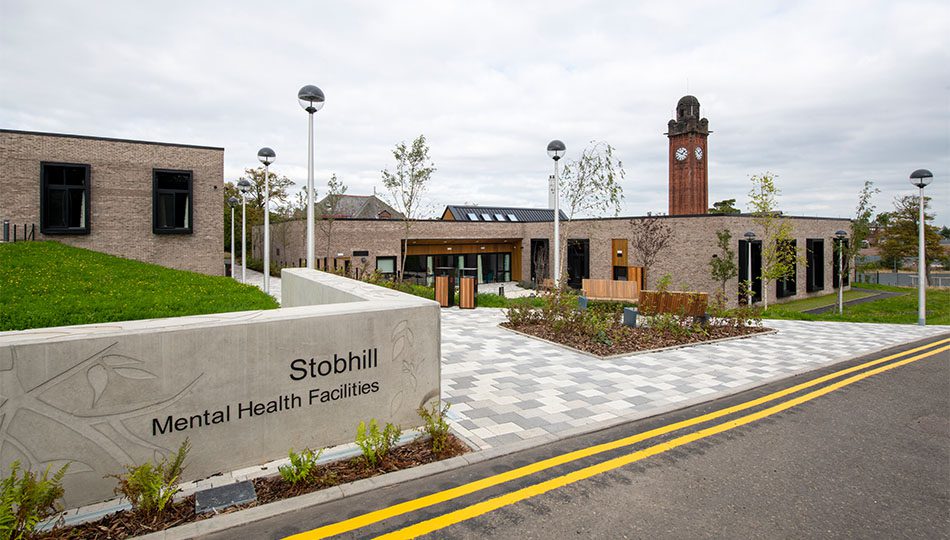 The new Stobhill Mental Health Estate was conceived during a time where the understanding of the pressure on mental health services throughout the UK was growing. Several media outlets, perhaps most memorably, The Guardian, concluded that the scale of the UK’s mental health challenge had been underestimated. The inference that delivering parity of esteem in care – defined as ‘valuing mental health equally with physical health’, as it is established in legislation and numerous policy documents – was not matched by parity of financial investment.

In Scotland, mental illness remains one of the major health challenges. It is estimated that more than one in three people are affected by a mental health problem each year; the most common of these being depression and anxiety. Even before the growing social impact of Covid-19, it had been established that people living in the most deprived areas were more than three times as likely to spend time in hospital as a result of mental illness compared to people living in the least deprived areas.

In beginning to address such challenges in Glasgow, the NHS Greater Glasgow and Clyde anticipated the new Stobhill Mental Health Estate to be an exemplar in developing new models of care predicated on key principles such as

Additionally, the health planning for the project acknowledged principles for integrating mental health into new models of care, established by The King’s Fund.

As part of their wider mental health services strategy (NHS GG+C) proposed to re-provide a 20-bed adult facility (AAU) to replace existing facilities at Parkhead Hospital, and a 20-bed elderly ward (CCC) that will replace an element of the bed capacity at Birdston Nursing Home. Both were to be supplemented with associated staff and clinical support spaces, and as part of a new facility on a cleared site. The fundamental changes needed were likely to be harder to achieve if mental health was added onto pre-existing plans that have not considered it from their inception. To achieve meaningful integration of mental health in new care models, it must be a key consideration throughout the entire development process, including during the early design phases.

Keppie were selected as designers for the project following a competitive process run by Hub West. From the outset, the ideas that went into the development of our proposals were resolutely people-focused; seeking to provide a considered and balanced environment which remains welcoming, caring, calming and non-clinical.

The Complexities of the Site

The original Stobhill Hospital was designed by the architects, Thomson & Sandilands for the Parish of Glasgow and constructed over a 5-year period, opening officially in September 1904, originally functioning as a ‘Poor House’. In 1939 the hospital was transferred from the Parish Council to Glasgow Corporation, then moved again onto the NHS in 1948.

Extensions including a geriatric unit (1953), a pharmacy (1961), a premature baby ward (1962), the Edward Unit for Mothers and Babies (1963), a staff library (1964), the Clinical Teaching Centre (1967), a modern Pathology Department (1968), and a new operating theatre and postgraduate medical teaching complex opened (1970) further expanded the complex’s capabilities. It has remained the main hospital serving the north of the Glasgow as well as parts of Cumbernauld and East Dunbartonshire.

The management of Stobhill passed to the Stobhill NHS Trust in 1993, before this was replaced in 1999 by the larger North Glasgow University Hospitals NHS Trust. In 2004, it was finally transferred to NHS Greater Glasgow and Clyde who have overseen many of the recent developments, forming a comprehensive mental health facility on the Stobhill campus.

One of the main architectural challenges noted from the initial site analysis was the fragmented nature of this existing context. Other than the existing pieces of the original masterplan, there was little consistency in either style, form or massing in the surrounding context.
In order to create the best healing environment for service users and working areas for staff our first instinct was for the chosen form and materials to seek to maximise natural daylight, be robust to ensure minimal future maintenance and compliment the predominant use of red brick which existed on the campus.

When the project began, the site was occupied by 3-day units, two of which formed part of the original hospital campus plan. These had been deemed unfit for purpose by the NHS and their demolition was part of phased development masterplan, also by Keppie. Adjacent to the site was a landmark B-listed Water Tower of significant local importance. It still provides an orientation point seen from several notable points across the city. As our ideas developed, the constancy of a view of the Water Tower – even if merely glimpsed – from calm internal courtyards became a consistent design driver.

The proposed design concept of our masterplan sought to establish a hierarchical order for the future development of the campus. This order referenced the traditional early 20th century layout of the original hospital campus, reinforcing this by adding clear and cohesive balance of built zones and open public (and private) spaces. A calm, people focused environment is the ultimate aspiration of the masterplan design guidelines, into which our designs for the new buildings would sit.

Responding to the Brief

Originally, the schedule of accommodation (SoA) developed by the Healthcare Planner was based upon one building housing both units, staff and clinical support, alongside shared facilities such as physiotherapy and tribunal suites. As the brief developed these shared spaces were removed from the SoA. Resultantly, through consultation with relevant stakeholder groups the idea of one single building was discounted as there was no longer a need for the two units to co-exist. This decision was also influenced by the challenging site levels and briefed requirement for on-grade access to both units and gardens.

Through extensive stakeholder engagement, it has become apparent that both units should express a clear progression from public to increasingly private facilities.

For the CCC unit, the provision of a wander route that led through the unit, out to the garden and back to the day spaces was an important consideration. As was the separation of day space and service routes to avoid any distress to the patient group.

In the AAU, a ‘secure line’ was identified in the initial adjacencies diagram. This was established to support the function of the interview rooms and allow family members to visit service users in the dining room without fully entering the ward.

We recognised that the steeply sloping site would prove to be challenging in terms of providing level access to both new units and their gardens. However, we also knew that it would give the new buildings prominence and visibility within the mental health campus. The exposed nature of the site to the east and south had to be sensitively considered to ensure patient privacy and dignity.

The prominent site afforded us good opportunities to reinforce the design of the new units as positive, welcoming and therapeutic additions to the campus, instead of being hidden like so many mental health facilities. It also permitted us to take advantage of the natural light, and the path of the sun, even if for those often-infrequent times when it makes an appearance in the west of Scotland.

The design exploited the surrounding context to focus on connection with outside space. The overriding design driver was to facilitate key stakeholder requirements of the perception of permeability; a feeling of openness and light throughout the facility, views of green space and easy, safe access to therapeutic external spaces.

The necessary observation required for the function of both units was enhanced by planning scheduled accommodation around courtyards which became pivotal to the design in terms of light ingress, access to secure and protected amenity space and of utilising nature to evoke a calming environment.

Now completed, our distinct separate buildings address the street with an elevated hard edge, which allows for the entrance recesses to be clearly defined and affords privacy to the occupants. Due to the proximity of an existing car park to the south of the site, the built form is located to the north of the site, allowing for large planted south-facing external spaces to form a buffer between the two.

The pattern of an existing footpath through the site is honoured in our design. Its reinterpretation adds another layer of permeability to the scheme and aids the proportions of a campus-like feel. Using the topography to its best advantage, the feature space to the north-east of the site directly facing the existing Water Tower forms a stopping point for the public without disturbing the occupants of the building.

A key aspiration for the project was to provide welcoming and non-clinical spaces that enhance the dignity of their occupants, while addressing the procedural, operational and brief requirements as outlined by NHS GG+C. These points have formed a starting point for the design for the Stobhill Mental Health Estate from the beginning, influencing all key decisions from site arrangement to material choices and finishes.

The building strategy closely follows the site and spatial adjacencies requirements, with the service user and staff + operational zones clearly separated by secure lines, beyond which visitors become invited guests. Day spaces are grouped directly adjacent to external green space, with the larger volumes of the main sitting and dining areas facing East to maximise ingress of beneficial morning light. Views back to the day spaces encourages service users to leave their bedroom.

Bedrooms wrap round large courtyards to maximise staff observation, whilst providing therapeutic aspects both on entering and exiting the bedroom. All bedrooms receive natural daylight as well as connections to the site and wider campus.

During the design’s development there were several investigations into the benefits of an inboard bedroom module as a comparator to the interlocking bedroom module that had been briefed. These investigations presented to the stakeholder group maximised the prescribed 3.6×3.7m clear working zone around the bed whilst seeking to maximise external views.

The internal design is sympathetic to the needs of Dementia patients through the careful use of colour and pattern, avoiding visual barriers and creating memory way points. The use of specialist reduced ligature Ironmongery to doors and windows, sanitaryware and furniture in the patient areas allows the environment to be considered as safe for vulnerable patients without the need for openly close supervision, helping to promote a feeling of calm.

Several studies were carried out focusing on the external expression of the elevations and means of breaking up the planes. The use of varying brick courses and pre-cast concrete panels was considered as a means of accentuating the ‘plinth’ which extends underneath both buildings due to the change in topography. Ultimately, the simplicity of combining light coloured brick, warm timber and contrasting dark aluminium fixtures influenced the decision to keep the brick façades as minimalist as possible.

The mass of each building is carefully derived from a clear programmatic response, then informed by a series of key contextual and environmental moves to define the buildings’ form. Both units follow the same key design moves and, consequently, read as a ‘family’ of buildings whilst remaining distinct from each other.

To achieve this, we established five design considerations that we were convinced would, if handled appropriately and in a balanced way, result in a successful grouping of the two buildings. These were:

Now that the new Stobhill Mental Health Estate in Glasgow has been completed, we feel that these initial aspirations have been achieved, resulting in an extremely successful design outcome.

It has been very pleasing to see the building receive widespread acclaim and receive several national design awards and commendations.

You can view the Stobhill project page here. 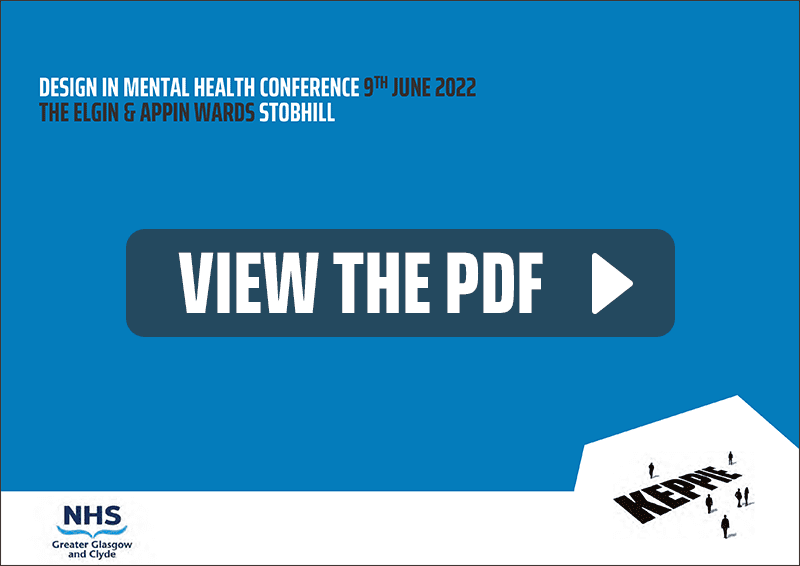 In the (15-Minute) Neighbourhood